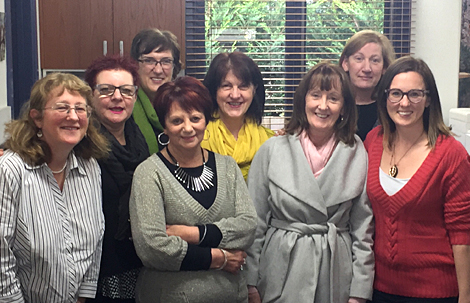 Plenty Road Medical Centre originated in 1983 by Dr Ken Dickinson, who remains an integral part of our medical team. Below are the details of our doctors at PRMC. We are proud and privileged to have a team of dedicated and committed GP's.

An important part of our medical team at PRMC are Division One trained nurses Maureen, Cathy and Anna. Our nurses contribute to the care of our patients by assisting with procedures, performing vaccinations and chronic disease health checks and plans.

At PRMC we are a family oriented, private billing practice and we are accredited to the Standards of the Royal Australian College of General Practitioners. Our administration is headed by our manager Janelle. Receptionists Cheryl, Rosa, Carol, Tania, Suzie, Ellie and Christie complete our experienced team.

The clinic has a fully equipped treatment room and an Accredited Pathology collection centre.

Dr Nguyen graduated from the University of Melbourne in 1997 and completed his RACGP Fellowship in 2003. He has been at PRMC since 2002. He has an interest in chronic diseases such as hypertension, diabetes and geriatric medicine. He also has a strong interest in medical education and has completed a Graduate Certificate in Clinical Teaching at Melbourne Uni. He is a Senior Medical Educator for Melbourne City Country Coast (MCCC) General Practice Training and an examiner of the College of GPs. He is available on Mondays and Tuesday mornings.

Dr Starkie completed her studies in Medicine at the University of Melbourne, and graduated in 2005. Her hospital training was through St Vincent’s Hospital and Royal Darwin Hospital. She has always enjoyed working with people and the various challenges in general medicine thus pursued a path in General Practice. She has a particular interest in Women’s Health and Paediatric medicine. In her spare time she enjoys spending time with her family. She especially enjoys activities with her 3 daughters.

Dr Joanne Ting is a general practitioner who engages in all aspects of family medicine including women’s and children’s health, student health and aged care. She is also affiliated with the Mercy and Northern Hospitals in their shared maternity care program.

After attending PLC Burwood, she studied medicine at the University of Melbourne and then general practice being awarded Fellowship of the College of General Practitioners in 1997. She has been at Plenty Road Medical Clinic since 1996 first as a GP registrar then to present as an associate. Her husband John is a pharmacist and they have three secondary school aged children. She enjoys playing tennis, spicy food and interior design and hopes to continue her part time bachelor of fine arts degree in painting at RMIT when time permits.

M.B.B.S., F.R.A.C.G.P.
Dr Vishy graduated from the University of Tasmania. Prior to starting his medical degree he lived and studied in Otago, New Zealand. Here he completed his primary degree in Microbiology and Psychology prior to entering medical school.

Dr Vishy spent his GP registrar years in country South Australia, prior to moving to Victoria after he completed his fellowship, FRACGP.

Apart from family medicine, he has a special interest in Aged Care, Mental Health, Counselling, Diabetes and Sports Medicine.
He enjoys all sports including rugby, AFL, badminton and cricket and spends a lot of his free time attending his garden. He is married with 2 kids and a passionate supporter of the Hawks!

M.B., B.S.D.R.C.O.G.,R.C.G.P.,F.R.A.C.G.P.
Dr George completed his medical training in the UK and has transferred to us from Perth, WA. Dr George has a special interest in skin cancer checks and minor procedures including skin lesion removals. Dr George also has an interest in chronic disease management, rheumatology and aged care for which he attends nursing homes. Dr George enjoys traveling and spending time with his wife and two children.

M.B., B.S., F.R.A.C.G.P.
Dr Kate Darbyshire graduated from The University of Melbourne in 2003 and became a fellow of the Royal Australian College of General Practioners in 2011.  She started working at Plenty Road Medical Centre in 2010 as a final term GP registrar and stayed on at the clinic after finishing her training. Kate enjoys all aspects of general practice but especially enjoys working with young people. Kate works at Lalor North Secondary college and Reservoir Secondary College as part of the Doctors in Secondary Schools program.

Congratulations on your retirement!
After 38 years of dedication and caring service to the patients of Plenty Road Medical Centre, our esteemed Dr. Ken Dickinson has retired. We hope he has a wonderful retirement. He will be missed but never forgotten. Dr. Dickinson has done so much for all of us and while we will be sad to see him go, we wish him all the best in this next stage of life! We are wishing him endless days of happiness with his family and friends – enjoying bushwalking, cycling and photography (which we are lucky enough to have inherited some of his wonderful pictures). Thank you for all your hard work and dedication. Dr. Dickinson's last day consulting was on Thursday 29/7/2021.